Menu
Register your interest
Victoria Lane Apartments
Back to News 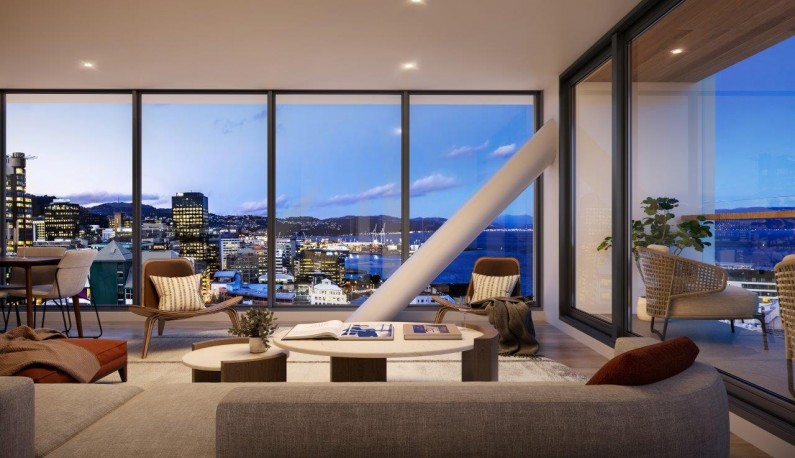 The building’s structural engineers, Dunning Thornton Consultants, say that the development is unique for Wellington as the fi rst multi storey apartment building designed to withstand a one in-a-thousand-year earthquake.

“The building incorporates both base isolation and a diagrid frame, which together signifi cantly enhance the performance of the structure and reduce building accelerations during an earthquake,” Dunning Thornton says.

“When the ground moves in an earthquake, conventionally designed buildings typically have to follow this movement. With a base-isolated building, the ground can move beneath the building without transferring all the forces and accelerations into the superstructure.”

“The diagrid, a grid of steel around the building’s perimeter, makes the superstructure very stiff, further reducing the likelihood of damage in an earthquake,” continues Dunning Thornton.

“In addition to the safety benefi ts, we’ve spoken to insurance experts who agree that this technology will have a signifi cant positive impact on building insurance and should result in lower body corporate costs.” Willis Bond & Co director David McGuinness says.

It is part of the developer’s wider plans for the Cuba Precinct. One of the city’s largest regeneration projects, it encompasses the block from 106 Cuba St to Dixon St, and west to Victoria St.

The first stage was the Te Auaha performing arts campus, stage two is the transformation of the former Farmers Building into character office space and retail tenancies, Victoria Lane Apartments is stage three and the fourth will be a new commercial building on the corner of Victoria and Dixon streets.

The apartment building will be set back from Victoria Street to maximise sun and views, which McGuinness says will be safeguarded by height restrictions in the Cuba Precinct and heritage Cuba Quarter.

“Athfield Architects have done a superb job, ensuring the apartments are light and spacious and get exceptional views.”

The apartments will be accessed from a pedestrian-only laneway and the development includes car parking.

As well as high ceilings and expansive frontages, most will have outdoor living spaces and many will include a spare room for guests, a study or media room.

The kitchens will be fitted with Bosch appliances, bedrooms will be generous and flooring will be a mix of oak and 100 percent NZ wool carpet.

A Homestar design rating of seven is being targeted, with LED lighting throughout, energyeffi cient appliances, smart energy metering and double-glazing.

Book an appointment at our show suite